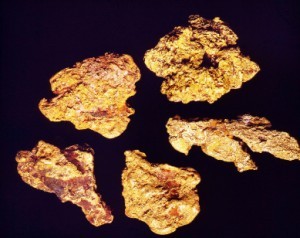 Introduction
Eight out of the top ten largest verified nuggets ever found were found in Australia and most of these were found back in the 1850 era.

We are just now discovering that nuggets are more rare than diamonds and they they only seem to occur near surface. Despite the fact that we now live in the gold detector era there are less and less nuggets found every year.

There are interesting natural features which distinguish real gold nuggets so an expert can verify authenticity to check against fraudulently created man made nuggets. Nuggets are rarely found far below surface and only then in ancient stream beds that were suddenly covered by material and buried.

They are formed by only two processes.

Primary gold deposits were formed when gold was leached from rock deep underground by high temperature acidic water and forced close to the surface by magma. Gold was deposited where conditions were favorable, i.e. falling temperature & pressure and acidity, commonly in the presence of quartz and pyrite however also with other minerals.

This process resulted in most of the gold ever found and is usually present as tiny particles, on occasion a nugget was formed in this manner in a larger rock crevice. In many areas of Australia, changing climatic conditions are believed to have caused a chemical process called weathering of primary gold deposits.

Acid and saline water leached and collected, sometimes with bauxite or ironstone. Near the surface gold could be precipitated by rainwater or iron salts, with sufficient levels of gold concentration and the right conditions gold nuggets grew over the passage of time. This is the more common source of nuggets and produced the highest purity of these rare and unique treasures.

Unfortunately the rarity of these unique geological wonders was not recognized and so most were melted down for income or use as jewelry. Even the very large specimens found in history have met this fate. Only two of the largest recorded and verified nuggets found are still in their original form, the largest is called the Hand of Faith (875 oz), found near Kingower Victoria in 1980.